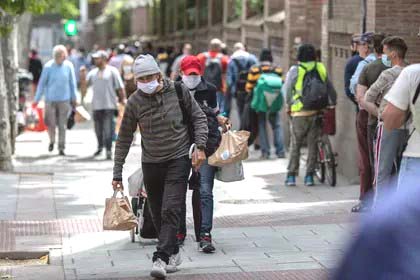 During this period of the pandemic, the Saint Vincent de Paul program had to adapt its services to the present circumstances. People now have to wait in line outside to receive a meal pack when it used to be served on a tray, seated at table. The meal, now in a plastic container, includes meat with potatoes, an omelet sandwich, a sardine sandwich and fruit. A recipient who is an artist, expressed his gratitude with a beautiful drawing (see below).

The Centre used to serve male immigrants but currently, about 50 percent of the beneficiaries are Spaniards. Women used to represent 11% of the recipients but this has increased because young household caregivers lost their jobs. This was the case of Edita López; when the elderly woman that she cared for died due to the corona virus, she was asked by the daughter to leave their residence where Edita stayed for 8 years. She was given until June 10 and she has no savings since all that she earned was sent to her family in Paraguay.

Sister Josefa has served here since 2016; during the 2008 recession, she was in a Centre in another city and she asserts that this crisis is more serious. The problem in 2008 was only financial, the present one is also a health crisis. In 2008, “those with family network especially elderly parents and grandparents, helped save the situation. This pandemic has isolated older persons, children cannot be with their parents nor accompany them in their hardships.”

The face of poverty has become vague and one can see this in the waiting line: there is the familiar homeless person who has always been there but now a self-employed person who recently lost his work is waiting in line. One can recognize the latter “because during the first few days, they look withdrawn and while waiting for the queue to advance, they get in and out.”

At the door are several parked bicycles. Along the sidewalk there are more than a dozen riders with backpacks waiting for their food pack. This is the opposite of working to have food at home and being fed on charity. Jarrison comes almost every day at about 1:00 p.m., he arrived from Peru eight months ago to work and be able to send money to his family, “but now that is impossible.” He earns about 400 euros “and almost everything goes to the rent for lodging”.“What the Daughters of Charity give me suffices, or I save it for lunch and dinner. They have also given me this rain suit, I am very grateful,”he says, as he sets off towards the hallway where other colleagues have stopped for lunch.

“I am Spanish and Andalusian, in Erte(a measure of labor flexibility, sometimes prior to the closure of a company…) and with 10 euros in my account,” shouts the only Spaniard willing to tell why he has to beg.

We pray for an end to this pandemic and for St Vincent de Paul Integral Centre to be able to continue its integral service to our brothers and sisters.

The President of the Republic and his wife honor Sr. André

Path of prophecy and hope

It has been a little over a year since three Daughters of Charity (Srs. Consuelo, Migdalia, and Paula) and one