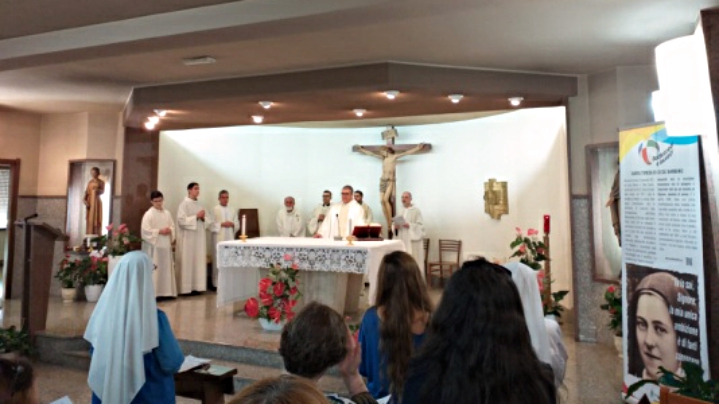 In celebration of the Missionary Day 2019 for Consecrated Women that took place in Sardinia, Sister Anna Anedda, DC, diocesan delegate to the Union of Major Superiors in Italy (USMI), proposed that the venue be at the Chapel of Casa Santa Luisa of the Daughters of Charity. There are many Sisters there who, because of age or illness, no longer carry out any ‘service’ but who still remain in ‘service’, in mission within the heart of the Church through their prayer, the offering of their sufferings and their love for humanity, like St. Therese of Lisieux.

In his homily, Father Franco Granata of the Carmelite Convent in Sassari who presided over the Eucharistic celebration, underlined this aspect: nothing can stop the one who continues to love, not age, illness, or a hostile environment. The Eucharist was concelebrated by the Rector of the Seminary, the Director of the Diocesan Vocations Centre and Father Joseph of the Convent of St. Mary;  almost all women religious Congregations of the city were represented, in particular Mother Adriana Reis Miranda, Superioress General of the Pious Sisters Educators of St. John the Evangelist of Sassari and Mother Maria Scalas of the Sisters of Gethsemane, also  of Sassari.

Today, religious profession does not require a change in name as in the past; consecrated men and women retain the one they received at baptism, which is the first true call. The mission is born at the baptismal font. Baptized and sentlike all Christians, these women and men are sent not necessarily to distant lands but where obedience sends them, as exemplified by St. Therese of Lisieux, patroness of the missions.

In front of the Blessed Sacrament, during the adoration that followed the Eucharistic celebration and before Father Ilario Bianchi concluded the prayer with a blessing, five candles were offered to represent the expectations, hopes, joys and sufferings of the peoples in the five continents.

We live in a world that needs the light and warmth of the Gospel and that can be embraced at all times by every believer, especially during this time of rapid change. Through love one can immediately reach all corners of the earth, even the remotest village in Madagascar, Brazil or India. This is what little Therese was able to do, and she understood that “in the heart of the Church, my mother, I will be love and I will be everything”.

A Nod from the Lord

At the request of the Prefecture and in partnership with the Red Cross, the “Œuvre du Berceau de Saint Vincent de Paul” welcomed Ukrainians displaced

Celebration of the 100th anniversary of the Province of Slovakia

The celebration of the 100th anniversary of the Province of Slovakia held from May 12 to 15, 2022, was deeply

Twofold Joy of the Lord’s Resurrection

This year, the joy of the Lord’s Resurrection is twofold. On the first Sunday after the first full moon following

Daughters of Charity in war zones in Ukraine send an Easter message: Easter 2022 A mother buries her daughter alone,