Who would ever have thought that there would be Daughters of Charity when the first of you came to a few parishes here in Paris? Oh no, Sisters! I didn’t think of it; (…). God thought of it for you. …He’s the Author of your Company, much more truly so than anyone else.

The Company of the Daughters of Charity was born imperceptively, in the manner of the things of God. The Spirit of God breathed into the hearts of several persons, Vincent de Paul, Louise de Marillac and Marguerite Naseau. Successive and significant events marked their lives. Little by little they saw the hand of God in these events.

Vincent de Paul discovered the material and spiritual misery in the countryside. In 1617, in Châtillon les Dombes, he brought together the ladies of the bourgeoisie after an encounter with a poor family. He founded the “Confraternities of Charity.” They were to organize the daily material support and spiritual accompaniment of those who were poor in order to help them move toward well being and regain their self assurance.

Louise de Marillac, who had always been aware of those in difficulty around her, visited poor persons even before meeting Vincent de Paul. Attentive to the needs of the most humble and with an open heart of faith she visited the first “Confraternities of Charity” at the request of Vincent de Paul. 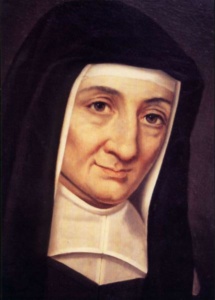 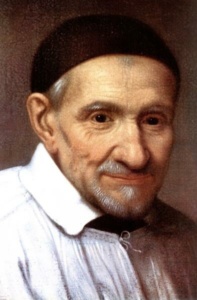 Vincent and Louise realized that the direct service of poor persons was not easy for the ladies of nobility or of the bourgeoisie. It was difficult to overcome the barriers of social class. These women took meals, distributed clothing and gave care and comfort. They visited the slums dressed in beautiful dresses next to people they considered to be peasants: what a formidable challenge! The tension between the ideal of service and social constraints was real. The families of the ladies were not always favorable to these works.

Marguerite Naseau, a 34 year old woman from the countryside in Suresnes, taught herself to read by asking those whom she met along the road to help her. She worked in her village with other young girls teaching children to read. Her only intention was to serve God. She met Vincent de Paul with other priests of the Congregation of the Mission during one of his Missions of Evangelization. In 1630 she met up with Vincent and Louise in Paris. They suggested that she help the Ladies of the Confraternities.

Louise had the idea that young women, like Marguerite, could assure the concrete, daily service of the poorest people. Vincent was happy that the simple country girls could come to the aid of those in need. But the idea of creating two distinct groups from different social classes, with the Ladies on one side and the “humble country girls” on the other didn’t seem appropriate. After three years of reflection, their ideas came together.

Three stories, three vocations intersect and join together to serve those who are poor. The difficulties in the confraternities finally opened the way to a new creation: the Company of the Daughters of Charity was born on November 29, 1633. 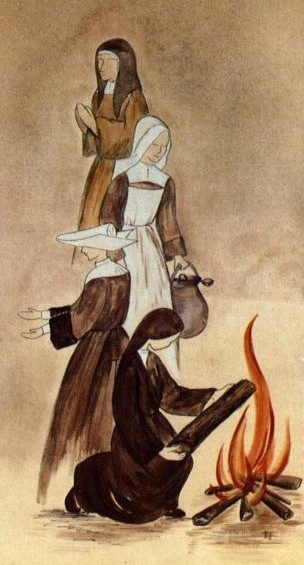 The Daughters of Charity differed from other religious congregations of that epoch because they were to encounter the poor, to see them in their homes. They maintained the necessary mobility and availability and lived among those whom they served.

They were to have, in the words of Saint Vincent,

Very early in their history, the Daughters of Charity expressed a desire to confirm their gift to God by vows; these were annual, not perpetual.  This specificity is always there: they make four vows: service of those who are poor, chastity, poverty and obedience.  These vows are according to their Constitutions and Statutes and are recognized by the Church.

The first Daughters of Charity took care of the sick poor in their homes.  Later, they cared for the sick in hospitals, educated young girls in schools, cared for the foundlings.  They took care of the galley convicts, wounded soldiers, the elderly and the insane, the marginalized; they went everywhere and anyone in need was the object of their care.

The Company quickly became international.  The missionary spirit, which developed from their beginnings, soon took Daughters of Charity far away.  Poland was the first step for the Company to become international.  The Company is now widespread throughout the whole world and tries to respond with creativity and courage to the appeals of the Church and of the poor, while respecting cultures.

The sending on mission of the Sisters throughout the whole world (Mission Ad Gentes) is at the heart of the vocation of the Daughters of Charity. 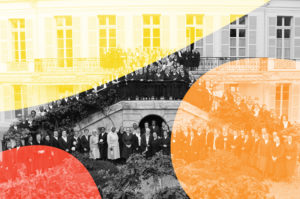 The Daughters of Charity realize that they are called by God. In their life of prayer, as in their life 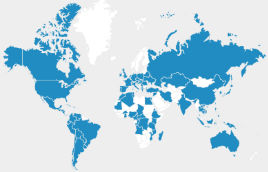 Sisters throughout the world, Communities, Countries. See the interactive map Click on a country to display the details…

Saint and Blessed Daughters of Charity

Saints and Blesseds of the vincentian Family