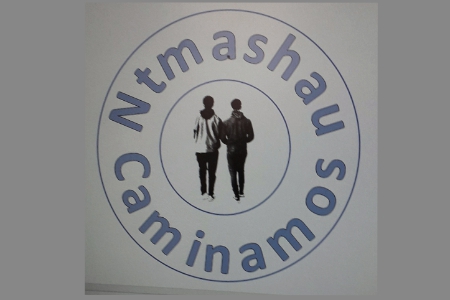 First year in the Interprovincial project in Melilla

Following the Pope’s message “to be a Community on the way”, the provinces of the Daughters of Charity of Spain went to Melilla, Spain to form an inter-provincial ministry which would work to alleviate the plight of immigrant children living in the streets.

One year ago, trusting in Divine Providence, 5 Daughters of Charity arrived in Melilla with the first tasks of getting to know each other, settling and furnishing our new home, and meeting people.  Fr. Rafael, a parish priest, greeted us and helped us to find our way around the city.

This first year was one of following the example of Jesus of Nazareth who walked through villages talking, listening, comforting.  We began doing the same.  We looked for the places where “young people” lived, met with authorities and collaborators, and studied Arabic and French to help us communicate with the children.

Now, we have a place where they can spend afternoons learning Spanish or connecting with their families and friends through the internet. At 9 p.m., we accompany a group of volunteers who bring food to everyone who is on the street (sometimes not so young). There have sometimes been as many as 100 people.

The young people want to go to the Peninsula. To do this they often take great risks, traveling under trucks or hiding on boats.  They know some will not make it, but they take the risk.

In Melilla, we collaborate with the Parish Caritas by visiting families, teaching language courses and post-communion catechesis; one sister collaborates in the Parish council, liturgy group, etc.

Every day one sister goes to Nador, Morocco, to collaborate with the Immigration Delegation. Sub-Saharan immigrants live in these camps and are served in the mountains. On Friday afternoons, we visit the CETI, Center for the detention of foreigners where we meet the immigrants seeking asylum and able to move to the peninsula (many have arrived in boats or have just jumped the border fence).  We sometimes have the joy of meeting them again in Nador mountains or the Peninsula. When they pass to the Peninsula we continue contact with some of them.

As other needs are emerging, we are responding with openness to everything that Divine Providence is asking of us.  Little by little as needs arise other activities are beginning

It has been a little over a year since three Daughters of Charity (Srs. Consuelo, Migdalia, and Paula) and one Vincentian priest of the Eastern