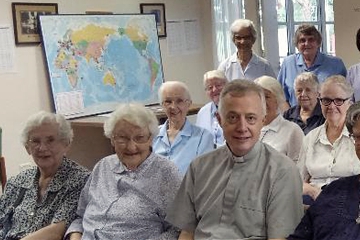 Twenty-five DCs gathered to welcome Fr Tomaž. He entered the Meeting Room and personally greeted every Sister before sitting down to a cup of tea. This gesture put everyone at ease. Fr Tomaž then gave us an informal address, followed by questions and answers. We loved his simplicity in responding to Sisters’ questions and we admired his knowledge of world events not necessarily connected to the Vincentian Family.

After an hour of conversation, I accompanied him on a visit to four of our Sisters who are in Care at our Bethany Villa Nursing Home located next door. Three of these Sisters are well into their nineties but their delight at seeing our Superior General and responding to him was a joy to behold. The third Sister was in bed, her smile was brilliant and her face radiant as she was introduced to Fr Tomaž. His visit to the fourth Sister was longer because she was able to engage herself longer! This Sister has admired the writings of Fr Tomaž and she gladly let him know of her admiration! She then proceeded to tell him of her activities at Bethany Villa e.g. poetry sessions with a small group of the residents, weekly reflections during the Seasons of Advent and Lent, again with a group of residents. Fr Tomaž invited Sister to recite a poem and she did so verse after verse for at least three minutes without a single word in front of her or without any prompting! Fr Tomaž was fascinated! In Australia we would say “he was gob-smacked”!!!

Fr Tomaž and I then walked briefly through the Home visiting very quickly three residents. One had been our Business Manager and on the Provincial Advisory Board for many years. Now he is in his nineties and is resident with his wife at our St. Catherine’s Aged Care Facility. In gratitude for his years of dedicated service to the Community and his loyal friendship with the Sisters, I introduced Fr Tomaž to the couple. Next Fr Tomaž visited an Italian lady, resident for some time at St. Catherine’s and sadly is now bed-ridden. They shared a great conversation in Italian! Finally, Fr Tomaž blessed one of our Sister’s blood sister who is in Care.

Back at the Meeting Room Fr Tomaž celebrated Eucharist and the evening concluded with a simple meal together. February 11th was not only the Feast of Our Lady of Lourdes but it was also exactly a month before the Provinces of Australia and Great Britain integrate to form the Province of Rosalie Rendu.

Fr Tomaž was very generous with his time and several of the Sisters took the opportunity to speak with him personally about their past or present ministries, their interest in our Sisters’ engagements in other parts of the world where there is much suffering. They were also interested in Fr Tomaž’ reference to being instruments of change through Vincentian representation at the United Nations level.

Reference the bush fires which made world news! While our Sisters, their families, homes, and the people we minister to were not affected, thank God, nonetheless there were many tragedies involving loss of lives, properties, and livestock. Australians are very generous and more so when such disasters or tragedies occur. For months our greatest prayer was to intercede for good soaking rains. Eventually God answered by sending down torrential non-stop rains and storms for three whole days. These also caused havoc but God graciously answered world pleas on behalf of our country and the dams are no longer dry. During these non-stop rains a huge tree fell at an angle over the roof of St. Catherine’s Aged Care Facility and five of the residents had to be moved over to another section of the Home. Thank God, however, none of these residents were hurt. Their rooms are still under repair. The evening that Fr Tomaž arrived in Sydney was the first of the rainy stormy nights!

It has been a little over a year since three Daughters of Charity (Srs. Consuelo, Migdalia, and Paula) and one Vincentian priest of the Eastern