The Provincial Assembly of the Daughters of Charity in Sardinia took place in Cagliari from 31 July to 10 August at the Mater Nostra Provincial House. It was presided and animated by Sr. Caterina Bua, Visitatrix and Fr. Italo Zedde, Provincial Director. The theme and logo are deeply meaningful and relavant both because they are perfectly in tune with the Church’s path and in view of the General Assembly in 2021 which will give the theme an international perspective.

The work of the 56 participants from various local communities began with a thanksgiving to God for the gifts we have received over the past six years as a Company in Sardinia, whose charism, Caritas Christi urget nos, handed down to us by St Vincent de Paul (1581-1660), is still of burning significance today. It is from this “thank you” as well as from the reaffirmation of the priority of evangelisation  that we outlined new paths of sharing and fraternity, of charity and service to those who are poor.  The Assembly also prepared us for the unification of our Province with other Provinces and while many “fears” were articulated, there was great trust in the Divine Providence.

Our Assembly thus took on greater enthusiasm and a more joyful atmosphere, hopeful of seeing traditional and new services renewed and flourishing again, albeit in a small way, always courageously on the move despite the poverty of human resources, and totally confident in the love of a Father who, as St Vincent de Paul says, loves the poor and consequently, loves those who love the poor.

We were enlightened as we immersed ourselves, even if only in broad strokes, in the theme of Pope Francis’ Laudato Si’ that urges us to go out of ourselves, to welcome the weakest, to care for creation in our daily actions… which, through education, can move us toward shaping a simpler lifestyle (cf. LS 211). This was the spirit that guided and animated our days, with exchanges and reflections that stimulated us to open ‘doors’ that were sometimes unusual, for love of the mission, for deeper relationships, and for the spiritual life.

All of us, Daughters of Charity, are invited to be rooted in God while continuing to enter the world in which we live, opening ourselves to the face of the Other, trusting and praying that the Divine Goodness give impetus and life to all our actions and animate them ever more with His Spirit (cf. St. Vincent 6 December 1658, VII, 389, transl. it. XIV, 614)

In an after-dinner programme, we watched a short video of our older Sisters who were interviewed; each spoke simply and realistically about her life today. These testimonies were all different but brought out from the treasure of the Charism a common spiritual gift that does not grow old with the years and becomes a self-offering and prayer for those who are poor, for the Company, the Church, and the parish community; a precious presence that is a tangible sign of total consecration to God, desired even in small villages. Our interventions in the Session Hall underlined their preciousness, the importance of visiting them, of paying them affectionate attention, and of maintaining constant fraternal relationships which are essential to keep their response to their vocation alive and active over time, to cultivate interests, to involve them in some work, no matter how big or small – and to continue to give themselves in joy until the last moment.

Attention was also given to some Community Houses in northern Sardinia that have been converted and enlarged to become polyvalent centres. On 9 August, with the singing of the Magnificat, we thanked God for the wonders of His Love and concluded our assembly work.

Saint Nicholas, please, be my protector and guide to heaven!

Let’s start with a short story about Saint Nicholas, the Bishop of Myra… Saint Nicholas of Myra is not a fictional character. He really lived 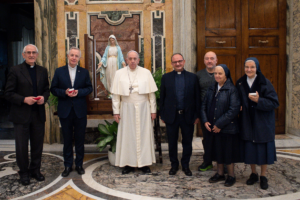 Pilgrimage with Mary: 190th Anniversary of the Apparitions of the Virgin Mary to Saint Catherine Labouré

On the occasion of the 190th anniversary of the apparitions of the Blessed Virgin to Saint Catherine Labouré, the Holy